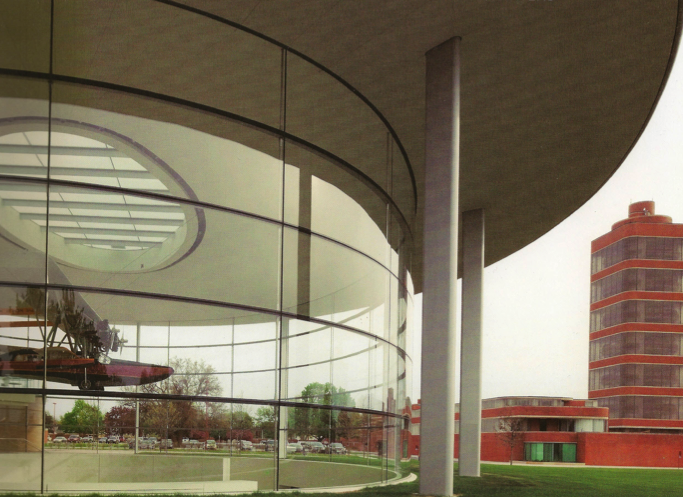 THE BASIS FOR A BUILDING’S DESIGN is often rooted in something seemingly inconsequential: a napkin sketch, a material sample, or, in the case of the new Foster + Partners-designed Fortaleza Hall, on the SCJohnson campus in Racine, Wis., an airplane. This isn’t just any plane, however, but the Carnauba -a replica of a 1930Stwin-engine Sikorsky S-38 amphibious plane. The late SCJohnson chairman Sam Johnson flew the plane to Brazil in 1998, with his sons Fisk, the current chairman and CEO,and Curt. The father-and-sons flight team replicated (down to the aircraft) a 15,000-mile-roundtrip journey made 63 years earlier by Sam‘s father to see the source of the Carnauba palm, the waxy leaves of which are used to make what was then the company‘s most famous product. (Wax has since been eclipsed by the company‘s other brands, like Ziploc.)

When Sam died in 2004 and the idea for a memorial building took shape, his plane became the central conceit. “What‘s wonderful about [the plane] is that it’s a very fine-filigree piece of engineering,” says Giles Robinson, partner-in-charge on the project. “When we developed the structural system for Fortaleza Hall, it was very important that it be a very elegant and simple backdrop to the complexity of the plane.” But building a contemporary, minimalist structure on SCJohnson‘s campus is a fraught proposition, given the iconic context. Fortaleza Hall, and the attached Commons building, sit between the Golden Rondelle (the company‘s Lippincott & Margulies-designed pavilion for the 1964 New York World’s Fair) on one side and Frank Lloyd Wright’s iconic 1939 Administration Building and

1950 Research Tower on the other. “It‘s a very fine balance-purely because every architect studies the Johnson Wax building-between wanting to do something that is contemporary, yet sensitive to that building,” Robinson says.“Alot of work goes into getting it right.”

This site uses Akismet to reduce spam. Learn how your comment data is processed.